Beautiful birds in the world 2022

On this post you see the top 10 most beautiful bird in the world it is very difficult to determine which bird becomes the most beautiful especially making it to the top ten because most of the birds will see are very beautiful however there are still some unique species of birds that have beautiful features that could make them top the others as the most beautiful.

one of the most prettiest creatures of mother nature are birds because aside planes what else you see on the sky are birds. on planet Earth there are several species and shades of birds that coexist with us this is because natural has formed every beautiful flora and fauna that is around us. Yet you would also find some colourful astonishing and beautiful birds in the world who has captivating colours and feathers.

Here are the Most beautiful birds in the world 2022: 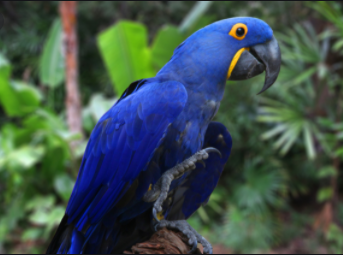 The hyacinth macaw is the largest of all flying parrot species in the world, measuring 100 cm in length. They can be found in Northern Brazil’s semi-open spaces and savanna grasslands. In recent years, their population has decreased. There are only about 5000 Hyacinth Macaws left in the world today. The principal threats to the hyacinth macaw are habitat loss and hunting.
The Hyacinth Macaw is known for its striking cobalt blue plumage with bright yellow rings around the eyes, in addition to its large size. The Hyacinth Macaw is also known as the ‘blue Macaw’ because of its stunning coloration. They also have a long, slender tail and a strong, curved black bill. it is definitely among the most beautiful birds in the world in 2022.

Hyacinth Macaws could make a great pet if properly trained. You should also give them a lot of space to make them feel comfortable. They are very playful and, unlike some other Macaw family members, are not very good at imitating words. 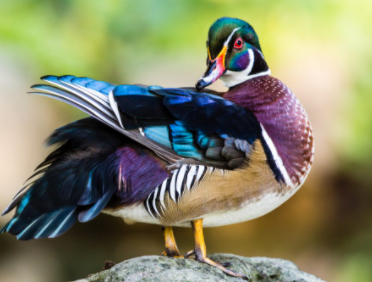 The wood duck is one of the most colorful waterfowl on the planet. The crest and head of the male bird are metallic purplish green. Their stomachs are white, and their chests are dark red. They have lovely, narrow white stripes along the throat. Their wings have a blue and black pattern.

Female wood ducks are not as colorful as their male counterparts. Their heads are grey-brown, their bellies are white, and their breasts are speckled with white. During the breeding season, male birds use their colorful plumage to attract female birds.

Throughout North America, wood ducks can be found in marshes, wooded swamps, and streams. Wood ducks are one of the most easily recognized birds in North America due to their distinctive coloration and shape. Wood ducks, unlike other waterfowl, build nests in tree holes and form flocks. 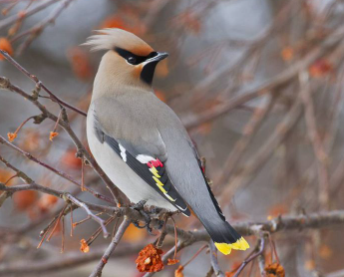 A medium-sized songbird with a characteristic crested head and black masks, the Bohemian waxwing is a medium-sized songbird. They are brownish-grey in color with white and yellow edging on their wings. As a result, the Bohemian Waxwing is one of the most attractive passerines on the planet. it is one of the most beautiful birds in the world in 2022.

The boreal forest of North America and Eurasia, primarily in Canada and Alaska, is home to Bohemian waxwings. They migrate in large flocks to the Northwest of the United States in the winter. They build their nests on tree branches. The high-pitched calls of both male and female Bohemian Waxwings are well-known. Insects and berries are their main sources of nutrition. 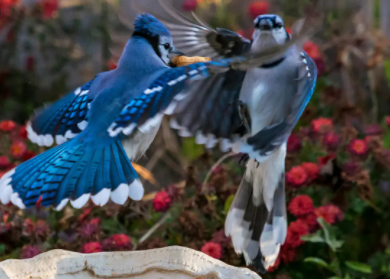 Blue jays are among the world’s most intelligent and beautiful birds. They can be found in Eastern and Central North American forests. Blue jays have beautiful blue, white, and black feathers. This songbird’s most distinguishing feature is its loud “jay jay”-like calls. They can also mimic the sounds of other bird species.

Blue jays are known for their intelligence in addition to their striking appearance. They have been known to steal nestlings and eggs from other birds. To fool other birds, blue jays imitate the voice of hawks. Blue jays in captivity are said to be able to imitate human speech and the voices of other dogs. 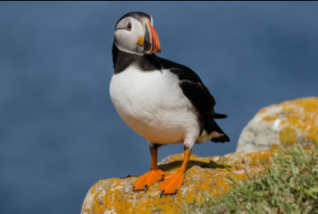 The Atlantic puffin is a small, well-adapted seabird found along the northern United States and eastern Canada’s coasts. Because of their large, multicolored bill and penguin-like coloring, Atlantic puffins are also known as “sea parrots.” The majority of the lives of Atlantic puffins are spent at sea. While swimming, their water-resistant feathers keep them warm. They swim on the surface and underwater by flapping their wings.

Puffins in the Atlantic have excellent diving abilities. When diving, they can reach depths of up to 60 meters. Sand eels, capelins, and hakes are the most common prey. Atlantic puffins are excellent flyers as well. They can flap their wings up to 400 times per minute and achieve speeds of 55 miles per hour. it is among the most beautiful birds in the world in 2022. 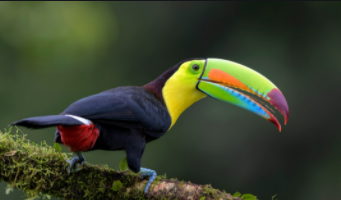 Despite its bulky appearance, the keel-billed toucan’s beak is hollow and light. Keratin is a type of protein that makes it up. During the breeding season, they use this huge, colorful beak to attract females as well as a defensive weapon.

This lovely bird can be found in the forests of Central and South America. They can grow to be 20 cm long and weigh up to 4 kg. The majority of their plumage is black, with a yellow throat and chest. Due to their heavy wings, keel-billed toucans are poor flyers. Hoping is the only way they can get between the tree branches. 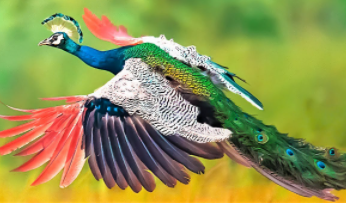 The male bird of the peafowl family is known as a peacock. Indian, Congo, and green peafowls are the three kinds of peafowl found around the world. The Indian peafowl is the most common peafowl species found worldwide. Peacocks (male birds) are known for their iridescent tail feathers that flash in the light. it is among the most beautiful birds in the world in 2022.

Peacocks can grow up to 5 feet in length, making them one of the world’s largest flying birds. In fact, a peacock’s long tail accounts for 60% of its total length. Peacocks’ colorful tail feather display is one of the most attractive courtship displays among birds.
Peacocks spread their huge tail feathers out during courtship displays to show off their colorful patterns and eye spots. Peacocks with longer tails and more eyespots are more common than those with shorter tails and fewer eyespots. A female peafowl, also known as a peahen, prefers a peacock with a longer tail and more eye spots. The color of a peacock’s tail feathers varies depending on the angle of light reflection. 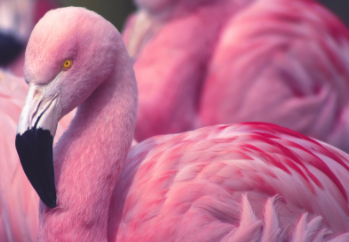 The flamingo is arguably the most well-known wading bird on the planet. Flamingos are unique among birds because of their beautiful red-purple plumage. Flamingos come in six different species around the world. Except for Antarctica, they can be found on every continent.

Adult flamingos can grow to be 4-5 feet long and weigh up to 3.6 kilograms. Their throat is long and lean, and their beak is curved downward. Flamingos’ legs are also extremely long, measuring between 30 and 50 inches. They can catch small fishes, larvae, and planktons from the mud thanks to their long leg and specially adapted beak. it is among the most beautiful birds in the world in 2022.
Flamingos live in vast colonies with thousands of individuals.

The food they eat gives them their striking red-purple hue. Brine shrimp, plankton, and blue-green algae make up the majority of their diet. Flamingos also spend hours lubricating their plumage with special glands that are found in their plumage. It enables them to keep their plumage in good condition at all times. 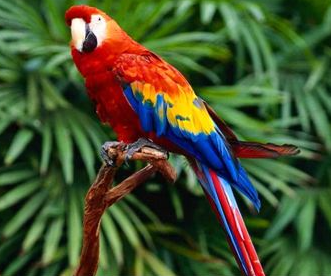 The scarlet macaw is a massive and handsome member of the macaw family. They live in Central and South America’s tropical evergreen forests. They are well-known for their vibrant plumage. Their plumage is brilliant red with a blue back. Their upper wings are yellow with a green edging.

A scarlet macaw’s robust, curved beak is another distinguishing feature. It has a white upper part and a black tip. An adult scarlet macaw measures 80-90 cm in length and weighs up to 1.5 kilograms. They are excellent flyers, reaching speeds of up to 35 mph. Scarlet macaws have a long lifespan as well. They have a 40-50 year lifetime. Scarlet macaws in captivity are said to be able to live for up to 75 years

The beautiful scarlet macaw is also one of the world’s most intelligent birds. They can effortlessly learn words, sounds, and tricks in captivity. A well-trained scarlet macaw is said to be able to recognize colors and shapes. 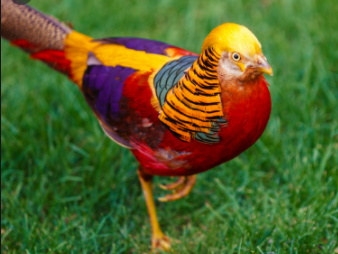 The golden pheasant is known for its brilliantly colored plumage and it is the most beautiful bird in the world in 2022. They have a lovely golden-yellow crest with red tips. Their underbelly and face are both brilliant red. Rusty tan on the sides and throat. The golden pheasant has a yellow wattle and a green upper back. They also have a long pale brown tail and dark red shoulder feathers.

Male golden pheasants are brighter than females. Scarlet breasts and flanks distinguish them. Their central tail feathers have prominent black spots as well. Female pheasants have a duller mottled brown plumage than males.

Golden pheasants can be found in Western and Central China’s dense forests and woodlands. The male golden pheasant is taller than the female. An adult male can measure up to 42 centimeters in length. Surprisingly, the tail accounts for two-thirds of the total length of the animal. Pheasants spend the majority of their time on the ground because they are bad flyers. Berries, seeds, and insects are their main sources of nutrition.