What are Farm Tools and how are they helpful?

Farm Tools are used for a variety of purposes on a farm. They are used to work the land, to transport crops and animals, and to process food.

Farm tools vary in size and shape depending on what they are designed to do. For example, a pitchfork is long and thin while a hoe is short and wide. Farm tools can also be made from metal or wood.

Farm Tools can be very helpful when it comes to farm life. They help farmers with their daily tasks such as planting, harvesting, feeding livestock, and processing food.

Farmers employ a variety of farming instruments to increase output and reduce the amount of work they have to do. These agricultural instruments make farming easier, resulting in increased farm produce yield.

Farmers utilize a variety of farming tools and equipment at various phases of the farming process. From soil preparation to planting and till harvesting, these farming tools are used. Unlike in the past, this has undoubtedly made farming easier and increased output.

Classification of Farming Tools and Their Examples

These agricultural tools and machines can generally be classified into 4 types of tools according to their uses:

Here are some of the common farm tools names with their uses and images; 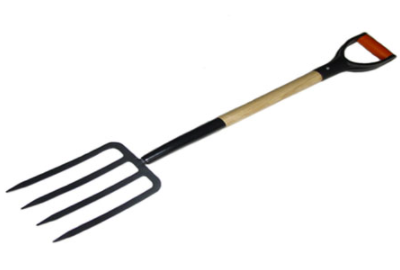 A spading fork is one of the most commonly used farm tools. It is designed to dig out roots, level soils as well as turn compost heaps before the planting stage. Its heavy head is ideal for lifting and turning large amounts of soil with ease.

A light hoe or a garden hoe is a type of garden tool which can be used for digging, chopping, chopping weeds, weeding and cutting roots. It comes in various shapes and sizes. They are primarily made of metal with wooden handles. 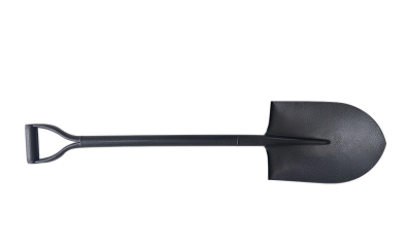 A spade is a tool used for digging and turning soil. It has a cutting edge on one side and a flat head on the other. It can also be used to carve, cut, or shape earth. 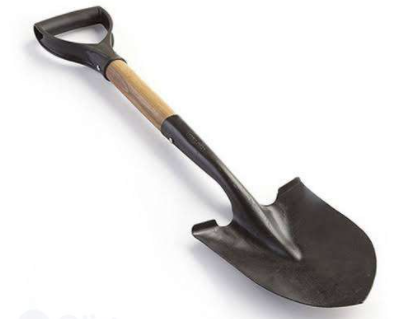 A shovel is a long-handled tool with a sharp metal blade, used for digging and moving earth or snow. It is typically used to move loose material in agricultural settings. 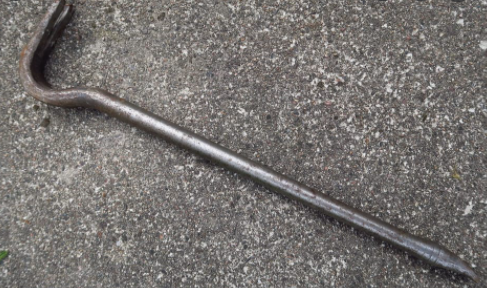 Crowbars are used mainly in the farm to pry apart objects that are stuck together. They work by wedging one end in between two objects and using the force of gravity to push them apart. 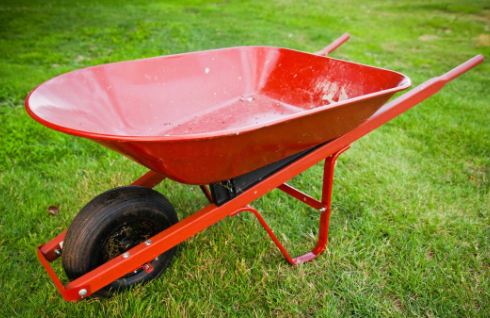 A wheelbarrow is a tool used to carry soil, mulch, etc. in agricultural settings. It is typically pushed and pulled by hand, but with the development of motorized wheelbarrows, it can now be powered by an engine. 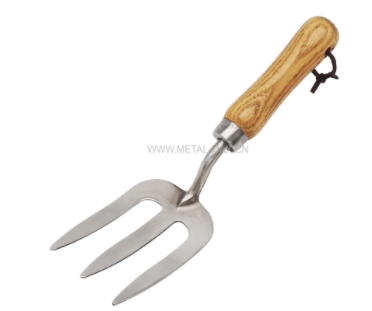 Hand Fork is one of many farming tools that is often utilized in loosening, mixing and turning soil. The shovel and fork are included here.

Soil aerators can be used to break up soil and create holes in very young gardens. They transfer oxygen into the soil and may be useful in growing plants. Because they’re so versatile, you may also find them useful if you want to remove weeds in your garden. 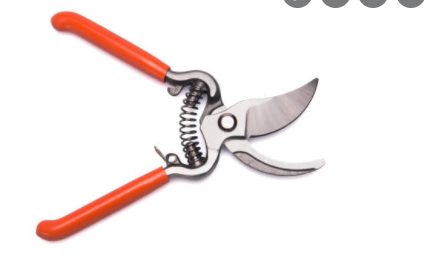 A pruning shear is a tool used for cutting branches and removing dead material from trees. It is typically used for shaping and thinning fruit trees, shrubs, and vines. The shear is also commonly used in forestry to remove small branches without harming the tree. 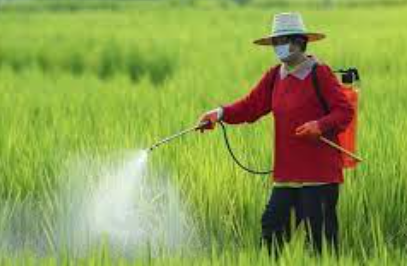 A sprayers is a device used to apply chemicals and liquids to the field in order to protect crops from harmful pests. Offspray from these devices can contaminate surrounding soil and water. 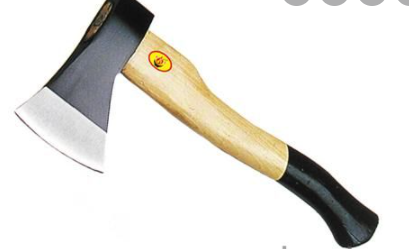 An axe is a tool used for chopping and cutting wood, logs and branches. It is typically made of a handle with an axe head that has an edge on one side and a round face on the opposite side. It is typically used to split wood into smaller pieces as well as chop it. Axes are also used in construction, logging, tree farming, mining and more.

Sprinklers are used to water crops and plants. It is usually a simple hand-held device which can be adjusted to set different flow rate and spray patterns. The water is released through an adjustable nozzle or a sprinkler head.

A hand cultivator is a tool that is used for cultivating plants. It can be used to pull weeds from the soil, loosen soil, and work the land. It has been developed by hand in many different ways over time, but there are still some cultivators that are manually operated and others that use an engine.

Sickle is a farm tool that is used for harvesting crops. Sickles typically have a curved blade shaped like an “S” and are made of metal, wood or plastic. They are used by hand or using a power sickle cutter attached to a tractor.

The word “tractor” is a term used to refer to any machine powered vehicle that helps with farming, construction and other related work. The word refers to the engine of a tractor, which is typically a vehicle’s power source. The tractor’s engine can be powered by gas or diesel fuel and it also has been found useful in mining as well.

A plough is a tool that turns up earth and creates furrows in the ground. It helps farmers grow crops, and can be used to till fields as well as to break up compacted soil.

Harrow is a type of farming tool that consists of an iron blade attached to a curved metal bar. Harrows are used to break up soil and turn it over in preparation for planting. Harrows can also be used to plough or harrow the ground, but they are most commonly used with the first three points in a triangular formation.

The agricultural roller is used to smooth the soil in a field or garden. It makes the surface of the soil more even, and with this even texture comes better drainage, less weed growth and increased crop yields.

Subsoilers are used by farmers to till and aerate the soil, without turning it over. They do this by rotating a harrow that grabs the top layer of soil and dumps it out. The process is usually repeated in a number of passes until the subsoil has been reached. Subsoilers can be used to break up hard surfaces with rocks, roots or other obstructions in order to create a hole for planting.

Harvester is a tool that is used to cut, thresh and winnow grain, straw, etc. Harvesters have been around for centuries and are still in use today.

Harvesters are typically powered by either a horse or an engine, but can be powered by humans as well. Harvesters were once used to separate the wheat from the chaff in the fields.

Seed drill is a tool that helps farmers to sow seeds uniformly and efficiently in the soil. It cuts the dirt into small pieces and spreads the seed evenly to obtain a uniform distribution. As per USDA, Seed drill is also used to apply liquid fertilizers as well as pesticides on crops.

Rake is a tool that combines a scythe and a rake. It is used on farms to cut, level, or turn over soil or other loose material. Rakes are usually made of wood, plastic, or metal, but can also be made from animal hair.

There are several other farming tools that aren’t mentioned here, such as the Pick-Mattock, Tillers, Cultipacker, and others. These tools not only save time, energy, and effort, but they also increase farming yields and produce.

what farm tools are used in land preparation?

Land preparation is a process that involves the use of different farm tools. The tools are used to prepare the ground for planting, harvesting, and other farming activities.

Some of the most common farm tools used in land preparation are ploughs, cultivators, harrows and weeders.

what farm tools are used in cultivation?

There are many tools that you can use for cultivation. These tools help in the process of planting, harvesting, and maintaining crops.

A shovel is a tool used for cultivation. It is mainly used to break up the soil and prepare it for planting. A spade is another tool that is used to dig holes for planting or transplanting plants.

how to care for your farm tools

The first thing we need to do is to clean our tools. It’s not enough to just wipe them with a cloth or a paper towel. We need to make sure that they are completely clean and free of dirt and grime before using them. For this, we can use soap and water, or even just plain water if we’re in a hurry.

Next, it’s important that you dry your tools off before storing them away for the next time you use them. This prevents rust from forming on the metal and also makes sure that there is no moisture left inside the tool which could cause corrosion.

why farm tools are very important in agricultural farm production

Farm tools are important in agricultural farm production. They enable farmers to do their work more efficiently and effectively, and they also make the work more enjoyable.

How Do I Find the Best Agricultural Tools?

The best way to find the best agricultural tools is by conducting research and by reading reviews from other farmers who have previously used the tool.