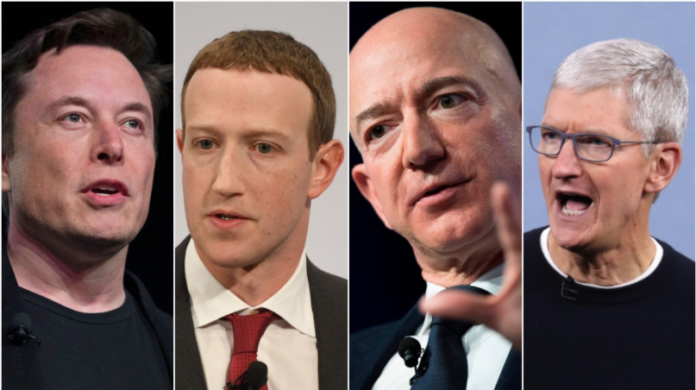 The salaries of the top CEOs in the world has been a topic of contention for a while now, with arguments against the huge sums of paycheck these big bosses receive. Being a boss comes with its benefits right? Am sure everyone agrees with that opinion. Most of these bosses had to work their way to the top. But the facts and stats have shown us that hard work and being determined won’t guarantee you such a huge paycheck these bosses are guaranteed.

And so, today we will be taking a look at the top 10 highest paid CEO in the world. This list features several popular names around the world including Amazon boss, Jeff Bezos and Mark Zuckerberg of Facebook.

These are the richest CEOs in the world in 2021 and their Net Worths:

Last on our list is an Indian American Business executive, Sundar Pichai, the current ceo of Alphabet inc and Google LLC. With a Net Worth 2021 of $600 Million, Sundar earns an enormous salary to see him make the list of top highest paid ceo in the world 2021.

Alphabet being one of the most powerful companies in the world, there’s no stopping the growth of this company most especially with Sundar as the boss.

Being the co-founder of the popular tech company Apply along with Steve Jobs, Cook takes the number nine spot on our list for being the current ceo of Apple. Tim officially became the ceo of Apple in 2011 to date. Tim has tremendously increased the market value of the company.

Many thought being the successor of one of Steve Jobs would be an impossible task but Tim Cook has proven to the world that with passion and hard work, anything is achievable.

Making the number 8th spot on our list of top 10 highest-paid CEOs in the world 2021 is American businessman, Jamie Dimon, chairman, and chief executive officer of JPMorgan Chase. With a Net Worth 2021 of $1billion, Dimon was once listed as one of the most influential people on earth.

Having been employed by many American companies, Dimon has proven to the world that is consistent and hard-working pays in the long run. Dimon over the years has been honored and awarded for his remarkable influence and contribution to America.

Supachai Chearavanont might not be a very popular name we are used to, but he is a big china business tycoon, who inherited his grandfather company and subsequently earned a big paycheck.

He is a Thai business executive currently the CEO and chairman of C.P. Group. As with every other businessman on the list, Suphachai had to work hard before reaching such a height of being one of the world’s highest-paid CEO.

Top 10 Highest-Paid Celebrities in the World in 2020

Elon Musk is one of the most vibrant business tycoons the world is privileged to have. Musk is known to be the Founder and CEO of SpaceX, CEO of tesla inc, founder of The Boring Company, co-founder of Neuralink, and co-founder and initial co-chairman of OpenAL.

With a Net Worth 2021 of $20 billion, Musk is the 5th richest man in the world and the 6th highest paid CEO in the world. Musk has ventured into several tech startups, some of which have been sold, some now defunct and some are a huge success. Tho always controversial, Musk’s intelligence and hard work keep him ahead.

Jack Ma’s story, is one of consistency and perseverance. Jack Ma made it known that he once applied for 30 jobs application and was rejected by all. Stating that this leads him to start his own company. Which is today known to be one of the biggest tech companies in China.

Ma Huateng popularly called Pony Ma occupies the number fourth spot in our list of highest-paid CEOs in the world 2021. Pony Ma is a Chinese businessman and investor, known as the chairman and CEO of Tencent.

Tencent is one of Asia’s biggest company, and one of the largest Internet and technology company in the world, it comes as no surprise seeing this great CEO with a Net Worth 2021 of $45 billion. From earning $176 by being a software developer for pagers to being one of the world’s highest-paid CEO, this shows hard work do eventually pay.

3rd on our list of highest-paid CEO in the world 2021 is Mark Elliot Zuckerberg, is an American internet entrepreneur, best known for co-founding Facebook, Inc, the highest social media network in the world. Mark serves as the chairman and CEO of Facebook inc.

With the huge success of Facebook, Mark has a staggering Net Worth 2021 of $74 billion, making him not only one of the richest men on earth but also one of the highest-paid CEO in the world.

Warren Edward Buffett popularly known as Warren Buffet is an American businessman and the chairman and CEO of Berkshire Hathaway. Warren Buffet is said to be one of the most successful investors in the world with a huge Net Worth 2021 of US$78.9 billion, making him the world’s seventh-richest man on earth.

Warren Buffet worked at Buffett-Falk & Co, where he occupied several positions before becoming the Chairman and CEO of Berkshire Hathaway Inc in the 70s. With hard work and dedication, Warren is known to be the world’s second-highest-paid CEO.

Jeff Bezos takes the number one spot on our list of Top 10 highest paid CEO in the world. Jeffrey Preston Bezos popularly called Jeff Bezos is an American entrepreneur best known as the founder, CEO, and president of Amazon.

Jeff is popular for being the world’s richest man from 2017 to date, with a huge Net Worth 2021 of $150 billion. Jeff has been acknowledged to be the first person in history with a Net Worth 2021 exceeding $200 billion. From just an ordinary online bookstore to the world’s biggest online store, it no surprise Jeff is currently the highest-paid CEO in the world.

With an ongoing argument about the huge difference between the paycheck of an employee and CEOs, only wise websites and other information transmission companies give the right information about the salaries of this ceo. This information could be misleading as not all companies adopt the same system of paying it ceo or average workers. Tho the gap needs to be bridged and we are hopeful it will be soon.