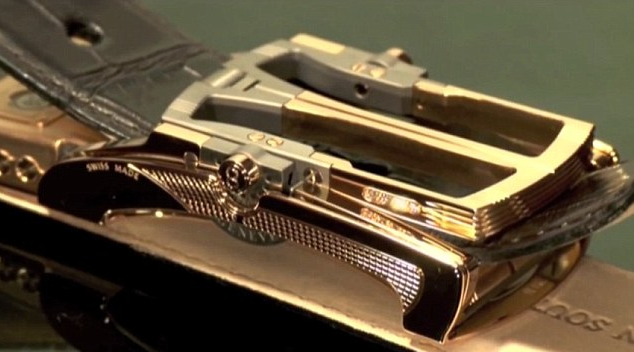 Most Expensive Belts In The World

Belts are simply flexible strap often made with leather and clothes that is mainly used by men, and worn on the waist. Yes, the ones we use every day!

Belts are necessary accessories every man needs to own, and they surely can be found in every man’s wardrobe. Belts are made up of metals and animal skins, which could be quite expensive.

Women are certainly not left out, women also make use of belts as it could create a unique look to their outfit. Belts could be used both for casual or formal dresses.

It an accessory, men certainly can’t do without. The majority of the male dress involves the use of a belt. There are some really luxurious ones which men love to own and use. Below are therefore a list of top 10 most expensive belts in the world.

The Versace Crystal 3D Medusa Belt takes the number 10 on our list of most expensive belts in the world 2021. The versace brand is a very popular brand with expensive products and their belts is not left out. With a Bold Versace logo and Medusa Head on it, the belt is known to be one of the most luxurious belts in the world owned by mainly by celebrities.

The belt is also known to be made of leather from calfskin and add a unique look to whichever outfit is worn with it. The belts comes in different sizes and form making it distinct and unique. This belt is estimated to cost #500k, making it one of the most expensive belts in the world.

The belts made by Ralph Lauren Brand is one of their most popular product that have done well in the marketplace over the years. Cowhide leather is one expensive raw material used in making the strap of this belt giving it a unique and distinct feature from other belts on the list.

9th on the list with an estimated cost of #680k. There’s no being wrong in getting this bet. It gives your outfit a unique luxurious look both casual or formal.

With an estimated cost of #700k, this belt is definitely worth that price tag. Giving users a unique luxurious look is something it offers.

Another luxurious belt with a crocodile calfskin on our list is the Cartier Crocodile Leather and Palladium Belt, made with highly valved leather and a luxurious palladium garnishing for a unique look.

7th on the list with a price tag of #900k in Nigerian naira, this belt add luxury to your look, increasing your overall confidence.

6th on our list is the luxurious handcrafted Billionaire Italian Couture Alligator Belt, which is also made from crocodile calfskin.

It a special Italian made belt that gives users that Italian look, they can’t get from anywhere in the world. Therefore making it very expensive, the best is estimated to cost #1.1 million naira.

There’s no leaving out the Louis Vuitton LV Initales 40MM belts out of this list. It certainly one of the most expensive belts in the world 2021 made with black crocodile leather alone with a brass buckle and the brand logo on it. Affordable by mostly top business men, this belts is a sure way to add class to your outfit either formal or casual.

Quite unique and outstanding, this belt is worth #1.3 million naira, making it one of the most expensive belt in the world.

Hermes brand is globally known for its luxurious jewelry and accessories, with the male belt not being left out. Their luxurious belts are made from calfskin with mouth-watering embellishments giving an ordinary outfit a rich classy look.

With an estimated cost of #1.9 million naira, this belt is worth every penny you spend on it. From giving you a classy look to making you feel comfortable, there’s no denying it worth the price.

3rd on our list is the luxurious Selfridge & Co. Gold Belt which is made for high-class individuals in our society cause of its cost. It is perfectly handcrafted, making it very expensive and therefore owned by major billionaires.

The belt has a mouth-watering cost of #13.4 million naira making it luxuriously expensive to get. It was made with the idea of letting it user gain that unique flexibility when using a leather material.

A belt with the look of a predator would definitely not come cheap. It is the second most expensive belt in the world right now, made up of 14 karate precious stone that are luxuriously expensive.

This prestigious belt is estimated to cost #32.1 million naira. It unique feature makes it that expensive, adding a unique look to the outfit of it users.

The Gucci brand being the most famous clothing brand in the world, it definitely comes as no surprise, the Republica Fashion Gucci 30 carat Diamond belt is currently the most expensive belt in the world right now.

With only few being manufactured, this belt is composed of 30 carate Diamond, making it highly expensive and only affordable by very few billionaires in the world.

The creation of the belt saw Gucci collaborate with Stuart Hughes in making this belt a world-class luxurious accessory. This belt is estimated to cost #95.3 million naira.

Above are the top 10 most expensive belts in the world right now. Owning one of those would definitely add a unique look to your outfit, giving you that classy and confident look you need to go about your daily business.

These belts are owned by billionaires such as top businessmen, politicians, and celebrities who have a large net worth. Affording one of these could mean being of the status of a billionaire. It gives owners an extra look to their outfit either casual or formal.