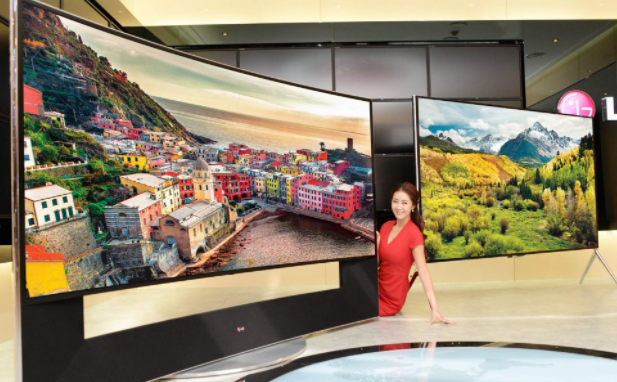 Most Expensive Luxury TVs in the World

Television is always on, and it’s everywhere. It can’t be turned off or unplugged when you’re not looking as people are constantly watching the newest TV show while flipping through channels surfing for something to watch next. This must have been what television was like before we had smartphones – a constant stream of programs just waiting for us throughout our day at any moment in time that might strike your fancy with its witty dialogue, dramatic plot twists, or hilarious joke (or three).

TV has evolved from being solely about information transmission into one of the biggest forms of entertainment there is today! From sitcoms to reality shows and news media outlets broadcasting live events around the clock.

For some people, watching their favorite show on a cheap TV just isn’t enough anymore. They want to experience the thrill of being in front and center for every explosive detail with all the bells and whistles!

For those who are looking for something more in terms of home entertainment, there are now TVs that offer even better features than ever before – like 4K screens (that display 16 times as much content) or OLED displays which use less power but have ultra-high contrast ratios. Those aren’t easy feats by any means so it goes without saying that these super-TVs come at premium prices. 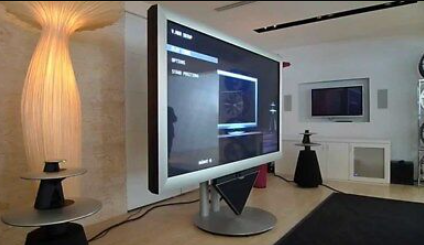 This is a prototype TV, and it cannot be purchased but it is one of the Most expensive TVs in the world 2022. It was manufactured by Beovision in Denmark to show off what could potentially become the future of television viewing. The screen is less than two inches thick with edge-to-edge glass that gives viewers an immersive experience because they’re not seeing LCD screens on either side or any wires to distract them from their content.

Bang & Olufsen, the Danish company that has been around since 1925 and offers a variety of audio products from speakers to stereos, recently unveiled their newest product – an ultra-premium 103 inch TV. The Beovision 4-103 will cost you $140K but it’s worth every penny thanks to its elegant design as well as two incredible B&O sound systems for not just viewing experience but also full-on “audio-video” entertainment! 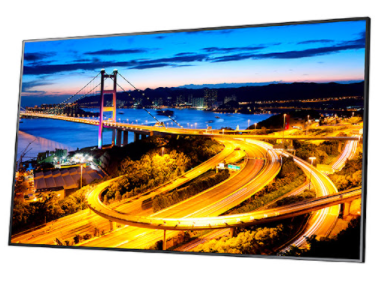 This TV is a 120 inch curved Samsung LCD panel. It has four HDMI inputs, three USB ports, and two-component inputs. The stand can be purchased separately or it comes with the package for an additional $150K!

Samsung is one of the most dominant companies on this market, but it comes as no surprise that their TVs are also some of the best and costliest. This model costs $150,000 which is less than what other models in Samsung’s line-up can get you for just a little more money; however its features make up for any price tag ills with such an impressive 3840x2160px resolution and 240 Hz refresh rate to keep things running smoothly throughout all 110 inches. The rich list of ports includes USBs and HDMI so there doesn’t need to worry about not being able to connect your favorite devices or hooking everything up properly – if only getting a TV into your living room weren’t hard enough already! 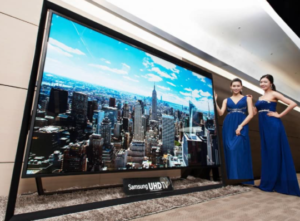 Samsung’s newest UHD TV is one of the most expensive TVs on our list, costing $2,000 more than its sister model. It has a large screen and astonishing features that are identical to those of its predecessor- what do you get for two grand? Motion Control. That means if you want your hands to be in charge of navigating through menus with just simple gestures or even by waving them around like crazy!

Samsung has been around since the days of black and white televisions, so it’s no surprise that they have a few models on this list. This one is from their “Ultra Audio” line and features six speakers with two subwoofers for 360 degrees sound in addition to its other specialties like:

…and best of all? It comes with a built-in turntable! Samsung UA11059 may cost you $152K but if your heart desires quality audio-video entertainment then who cares how much money there is on the table – just make sure your wallet can handle it because these prices are high enough. 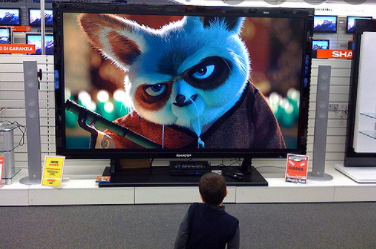 The Sharp LB-1085 is a commercial TV made for 24-hour use and rugged operating conditions. It features a 108 inch LCD screen with Full HD resolution which has low reflection technology to deliver a fine image in any lighting condition, ensuring that images can be seen clearly from almost any angle. Although this television may not have the best picture quality or color depth of TVs produced today, it still comes at a hefty price tag of $160 thousand dollars (the average cost is around $1 thousand). 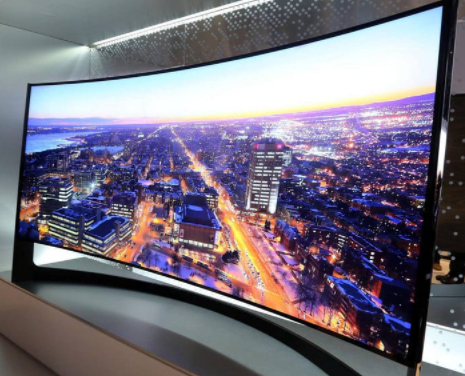 The Samsung UN105S series is a top-of-the-line TV made with UHD technology and eye-tracking. It’s 105 inches, but it has an impressive picture quality that makes up for its lower resolution (3840x1080px) compared to other models on this list – if you must have a large screen at all cost then get ready to pay $260K!

Samsung knows how to make TVs; they’ve been around since black and white televisions were all there was so it’s no surprise they’re one of the most dominant companies on our Most Expensive Televisions list. This particular model comes in two different flavors: A Super Audio version which features eight speakers including three subwoofers and also includes Bluetooth and WiFi connectivity and a Super Audio Ultra version which does not have any of the extra features but comes with even better picture quality.

This new Samsung TV has a price tag of $260,000. To put that into perspective the average middle-class American is earning around $54,000 annually and it would take 6 years to save up for this luxury item. But don’t worry about your wallet because you will be impressed by its awesome features such as UHD Upscaling and Precision Local Black Dimming which promises crystal clear picture quality with natural colors without any ghosting or blurring even when scrolling through pages of text onscreen! 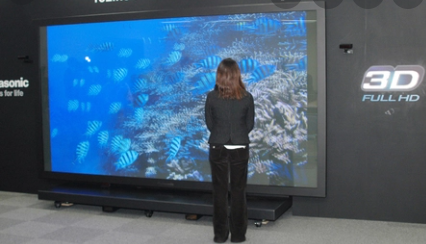 The Panasonic TH-152UX is a commercial TV made to be used in 24 hour environments and it is one of the Most expensive TVs in the world 2022. It has an 152 inch screen and even though it’s not the largest Samsung on this list, its price is still as high – costing $500K!

With a huge 152 inch screen, Panasonic’s half-a-million-dollar TV offers the most mesmerizing experience. This massive behemoth not only flaunts stunning features that can beat up any cinema in style and quality but also saves you money with its clever new technology. 4K 3D Plasma Display delivers smooth vibrant colors across an entire screen while reproducing rich textures through newly developed tech–saving your favorite movies from cinematic disappointment by giving them their original color back! But watch out for those numbers – this giant costs $500k and weighs 100 pounds or so which is heavy to both lug around as well as pay off monthly at quite high interest rates. 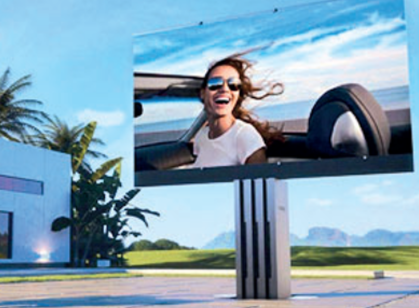 The C SEED 201 is a commercial TV with an impressive 200-inch screen. It’s made of durable materials and can resist any weather condition as well as vibrations from nearby sounds or construction equipment–making it perfect for 24 hour use at airports, train stations, hospitals, stadium events etcetera.

This baby, which is actually not a baby if you think about its weight (almost one and a half tons), has the highest resolution retina LED SMD 201 inch display on the market. It’s specially designed for those who want to have an outdoor cinema back in their garden.

The Porsche Design Studio created this stunning underground storage station that rises as soon as someone pushes it from underneath with just one button- at first glance something out of science fiction but when pushed again 3 massive led panels unfold into what will become your new favorite piece of furniture: changing by 180 degrees depending on whether you need some privacy or want guests hanging around all night like they do during football matches! Add 780,000 LEDs, 12 broadband speakers and three subwoofers. 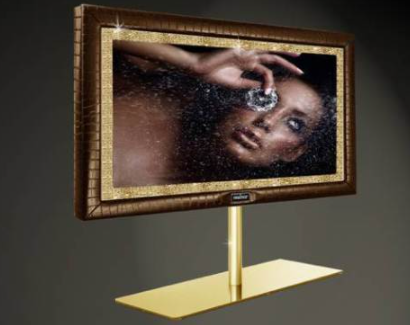 The third TV on our list of Most expensive TVs in the world 2022 comes from none other than the renowned British designer, Stuart Hughes. It’s not big as some of its competitors with it’s 55-inch display and doesn’t have all the bells and whistles that more impressive TVs out there sport.

Unlike any normal television, this baby is covered in 18k gold while adorned by diamonds, gemstones-even Alligator Skin! I’m curious what you could be watching: The show on screen or these beautiful gems? So for those who can afford a $1 million+ price tag to beautify your living room check out “The Gold Standard” 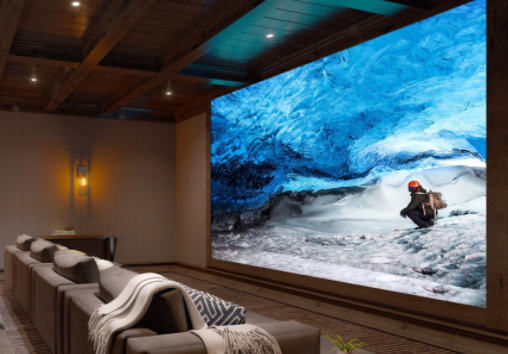 The Titan Zeus is the world’s largest TV with a screen size of 370 inches. You would need to be 50 feet away from it in order to fully enjoy its image, and at $1.6 million, you might want more than just one! This luxury television comes complete with motion tracking technology that will follow your every move as well as touch-sensitive functions so you can interact seamlessly without needing remotes or controllers for any media experience imaginable – including an amazing CGI aquarium feature that turns this enormous set into a giant fish tank like no other. 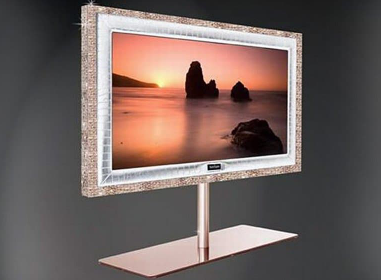 Stuart Hughes’ latest luxury piece of tech is the most expensive TV in 2022 costing $2,260,000. If you have the money to spare and want a one-of-a-kind flat screen that will never be replicated again then this product might just do it for you.

It’s covered with over 28 kilograms worth of 18k gold (which would make your average person sick) along with some Sunstone and Amethyst stones on top off alligator skin leather – making it not only an aesthetically pleasing addition but also durable too.

TV’s are a costly investment. Whether you’re looking for the most affordable television or one of the most expensive, it can be hard to know what’s worth spending your money on and which TVs will provide you with years of enjoyment. The following list should help give you an idea about some different options that might work well for various budgets. Remember, when buying a new TV make sure to take into consideration all aspects such as screen size, resolution and built-in speakers before making your decision! Which would you prefer?