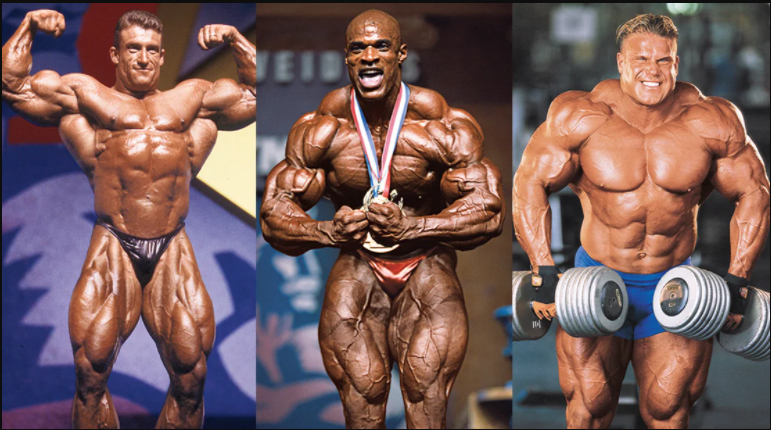 Top 10 Biggest and Richest Bodybuilders In The World

Over the years, the world has really changed and there has been a major development in human life. Who would have thought bodybuilding would be a career? Well, now there is! There are now quite several people who specialize in bodybuilding. These guys make a lot from their direct services, endorsement, and bagging movie roles.

Most bodybuilders do what they do for passion. These guys are dedicated to living healthy and have therefore inspired a lot of other people. In this post today we will be taking a look at the top 10 richest bodybuilders in the world. Let’s check them out.

These are the top 10 richest and biggest bodybuilders in the world in 2022:

Leslie Kai Greene popularly called Kai Greene is an American professional bodybuilder and personal trainer. Kai Greene took the second position in 2012, 2013, and 2014 Mr. Olympia competitions. Kai is also an artist and an actor. Greene at a very young age was reported to have a different body growth and was stubborn in school.

Due to this, his teacher had to advise Greene to join the school bodybuilding teams. And ever since, his bodybuilding career has earned him recognition and fortune. Today Greene is reported to be worth $1.5 million. Greene has also won many competitions in his career as a bodybuilder.

Mike is known to have no limit on how far he will go to achieve his goals. Mike was also recorded to have won the teenage Washington State competition in the united states at age 12. Ever since his career has blossomed and he has subsequently gone into acting. Over his career, Mike is estimated to be worth $2.5 million.

Dorian Andrew Mientjez Yates professionally called Dorian Yates is a British former professional bodybuilder, who won the Mr. Olympia title six times. Dorian is popularly known to be one of the top bodybuilders in history and is most famous for having a wide and thick back, that’s very different from most bodybuilders.

Yates has literally won every single contest he has contested, but his career, unfortunately, ended due to chronic acute injuries, which could become complicated if continues bodybuilding. Yates’s career was also fielded with a lot of controversies that were both positive and negative. Yet he is estimated to be worth $4.5 million, making him one of the richest bodybuilders in the world.

Phillip Jerrod Heath professionally called Phil Heath is another American professional bodybuilder, who has won Mr. Olympia seven times. Phil has an estimated net worth of $8 million from all his years of bodybuilding.

Phil has won so many competitions over the span of his career, and this has subsequently seen Phil earn a lot of money from bodybuilding. It is also worthy to mention that Phil is also a wrestler and wrestled for TNZ, where he won several belts and competitions. Phil started his career quite young also and had since been an ambassador for keeping fit.

6th on our list of top 10 bodybuilders with an estimated net worth of $8.5 million is Gary Strydom, a South African born American bodybuilder. Gary is known as being one of the only people to have won a Championship title under Vince McMahon’s now-defunct World Bodybuilding Federation.

Then, Gary’s career kind of dwindled after he decided to take a break from competing in the 90s. Gary before his break has won numerous awards in the competition which has earned him great honor as one of the best bodybuilders ever. These awards brought Gary fame and fortune and today he is known to be one of the richest bodybuilders in the world.

Ronnie Dean Coleman popularly called Ronnie Coleman is yet another American professional bodybuilder, who is now retired. Ronnie is highly honored for being the winner of the Mr. Olympia title for eight years, and he is popularly regarded as one of the greatest bodybuilders of all time.

Apart from winning Mr. Olympia for eight years, Ronnie is also known to have 26 titles throughout his bodybuilding career. With an estimated net worth of $10 million, Ronnie is one of the richest bodybuilders in the world.

Louis Jude Ferrigno Sr. popularly called Lou Ferrigno is another American bodybuilder, popularly known for being an actor. Lou is also a fitness trainer, fitness consultant, and has officially retired from bodybuilding. Lou has won numerous titles as a bodybuilder.

As an actor, Lou is widely known for his title role in the television series The Incredible Hulk. His acting career to have flourished over his career, as he has been featured in several movies including Sinbad of the Seven Seas and Hercules, The King of Queens and I Love You, Man. With an estimated net worth of $12 million, Lou is now known to be one of the richest bodybuilders in the world.

Jay has also written several books which have sold for millions. With quite a successful career Jay is estimated to be worth $30 million, making him one of the richest bodybuilders in the world.

Richard Gaspari professionally called Rich Gaspari is an American retired professional bodybuilder and was once a member of IFBB. Richard subsequently took the second position at the 1986, 1987, and 1988 Mr. Olympia competitions. Richard in 2011 was awarded the Muscle Beach Hall of Fame Award, was subsequently featured on the cover of Iron Man. Richard has also been praised over the year for his unique style of bodybuilding which includes his hitherto-unseen level of conditioning and definition. With an estimated net worth of $90 million, Richard is known to be the second richest bodybuilder in the world.

1st on our list of top ten richest bodybuilders with a net worth of $350 million, is Arnold Schwarzenegger. Am sure we all know him as he has been featured in many Hollywood blockbuster movies over the years. Arnold is an Austrian American actor and businessman. He is now a retired professional bodybuilder. Arnold has also had a career in politics where he was a politician who served as the 38th Governor of California from 2003 to 2011.

It is recorded that Arnold started lifting weight at the age of 15 and subsequently won Mr. Universe at the age of 20. He didn’t stop there, as he went on to become a seven times winner of Mr. Olympia. Arnold gained more fame for being a Hollywood actor and has won numerous awards in his acting career.

Arnold is widely referred to as the greatest bodybuilder ever and currently the richest. Arnold’s career is a very motivational one, his career speaks of hard work and determination. Despite struggling with challenges during his bodybuilding and acting career, Arnold still didn’t give but came out stronger and victorious. Today he is celebrated worldwide.