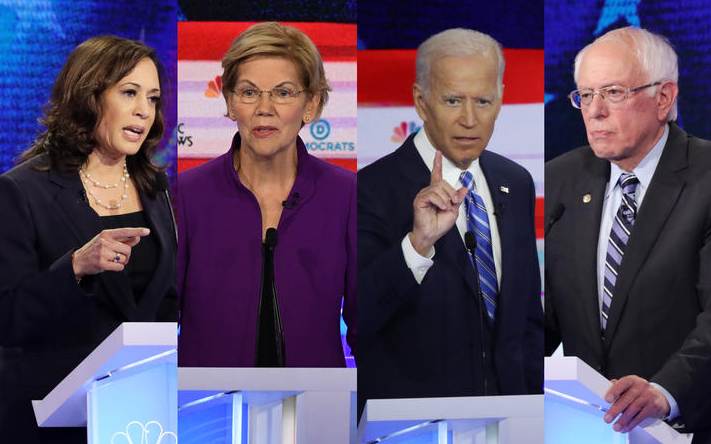 The 2021 U.S. presidential election is scheduled for November 3, 2021. They may elect the 46th President of the United States (in case Donald Trump is not elected for a second term).

According to the Second Article of the U.S. Constitution,a person must be a U.S. citizen by birth at least 35 years of age who has lived in the United States to be elected President of the United States of America for at least 14 years.

Most often, candidates are nominated by one of the political parties in the United States during the primaries.

The 2021 U.S. presidential campaign is notable for several things.

First, it comes at a time of unprecedented polarization of American society and the political system in recent decades. Secondly, the task of Democrats (and the traditional political elite in general) is not just to get into the White House, but to take revenge for a humiliating defeat in 2016, to restore the dominant position in the political process, and to overcome then crisis in the Democratic Party.

So the current campaign shows how much the Republican Party has changed in recent years and what Donald Trump’s figure means for the history and development of the United States. Many saw his victory in 2016 as a historical misunderstanding, which occurred solely due to the so-called Russian intervention and which must be overcome as soon as possible, after which the usual “normality” will return.

Today’s situation shows that this is not possible. The Trump presidency has already changed America and continues to change it. Already, the 2018 midterm elections have shown that the Republican Party has consolidated around Trump. The 2021 campaign demonstrates this even more clearly.

There is no talk within the party about whether Trump will run for a second term as a Republican and whether he should do so. The electorate that voted for Trump in 2016 is still loyal to him. Moreover, there is an understanding that Trump is the strongest politician on the part of the Republican Party and it will not be easy to defeat him in 2021.

Indeed, one of the biggest questions to date for Democrats is who can beat Trump. If the current president were only a historical misunderstanding and the result of “Russian interference,” it is unlikely that the question of the ability of any democrat to defeat him in 2021 would be so acute.

This is partly due to the fact that the U.S. economy continues to grow at a very high rate. But equally important is the fact that Trump is indeed popular with a large portion of the Republican electorate and the agenda he proposes (tightening migration laws, infrastructure development, foreign economic development nationalism and mercantilism) enjoys support.

He has managed to unite the Republican Party around him, while the Democratic Party continues to “scatter and stagger.”

Thus, out of a “misunderstanding” Trump became an important part of the American political elite, the ancestor of its new direction. Which will not disappear even if he loses the upcoming election. If Trump loses, the Democratic president will not get America without Trump, but Trump’s America and will have to build on his domestic and foreign policy legacy.

The second notable aspect of the campaign is the growing polarization of the American political system. Trump drives the Republican Party to the right, encourages and promotes conservative values. At the same time, the Democratic Party is increasingly leaning to the left. This is also evidenced by the pre-election statements of many participants in the primaries: free education and health care, expansion of social benefits and benefits. The party is desperately trying to call on the working class, who has gone after Trump, who has promised to bring jobs and industrial production back to America, to Republicans. The schism in American society on values, economic model, demographics is deepening, and the prospects for overcoming it are not visible.

The third aspect is that the 2021 election is decisive and a milestone for the Democratic Party, which is in crisis that began after its defeat in 2016 and its inability to take revenge in the 2018 elections, when Democrats got the least of what they got could count. To overcome this crisis, Democrats need serious renewal, new people and a new agenda. The next year will show whether the Democratic Party is able to renew.

On the one hand, there are new people, like Tulsi Gabbard and Kamala Harris. The agenda, as the first round of televised debates among the participants of the primaries showed, is also gradually becoming more socialist and less neoliberal. On the other hand, however, the establishment is still consolidating around the “old people” – most notably former Vice President Joseph Biden. Almost all of Hillary Clinton’s men gathered around him. And they position Biden as already the “single” candidate of the Democrats and trump’s main opponent. Biden has yet to win the Democratic race, nor is it a fact that he will win, but his rhetoric is not so much about arguing with other Democratic candidates as on a debate with Trump. It’s a worrying sign: The establishment is in favor of maintaining the course that led the party to the catastrophe of 2016.

Yet, as the debate shows, the Democratic Party – against the wishes of the establishment – is already being renewed. The winner of the first televised debate was not Biden, but Kamala Harris, a senator from California of Jamaican and Indian descent. And so far she is considered the new leader of the race. It seems that it is new people like Harris who are able to consolidate the Democratic electorate around them, not mothballed old men like Biden.

In the regard of US presidential election prediction, the crucial question is whether the establishment will resort to political manipulation like in 2016: artificially stoke the “wrong” leaders of the race and pull out their candidates. Back then, the Democrat leadership played up Hillary Clinton and interfered with Bernie Sanders.

If history repeats itself in the 2021 US presidential election, the crisis in the party will continue and it is likely to lose to Trump. What will be another disaster for Democrats. If this does not happen, then in 2021 there will be a real intrigue. However, the polarization of American society and politics will continue regardless of the outcome of the vote.